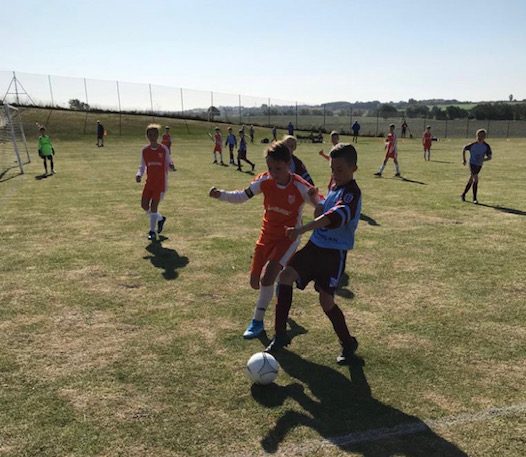 Mersham U12 remain unbeaten however lost their 100% record on Saturday despite battling back from two goals down at New Romney! It looked like Harry Burchett’s 20 yard free kick had won the game for Mersham,only for New Romney to equalise five minutes from time with a well taken free kick of their own!

It looked like Mersham were on course for their first defeat of the season as,despite Mersham keeping the ball better in the first half and having more possession,the Romney pace up front was too much for the Mersham defence to contain!Mersham struggled in the first half with chances- striker Harry Linford a lonely figure up front as Mersham found it difficult to find that cutting edge!Two quickfire goals from New Romney,midway through the first half,at Mersham all at sea and were unable to contain their opponents on occasions!

However,a change of position,personnel and shape saw a completely different Mersham showing after half time!They were first to every ball,had players running in between the lines and moved the ball around with vigour and venom!They could and should have gone ahead earlier-Izaak Guck missed a good chance to pull one back before Archie McCarthy dragged a shot wide with the goal gapping!

However,with 15 minutes remaining, as they continued to probe the New Romney defence,Mersham were rewarded for their persistence-McCarthy turning provider for Josh Mowat,who tucked in at the back post!Throughout the second half,Mowat was a constant threat, and two minutes later his corner was flicked on by Izaak Guck, whose shot was adjudged to have crossed the line by the referee!

As the Mersham midfield and forward line continued to creat chances,centre back Jack Neal was in imperious form,as Joseph Breen,Chloe Vaughan and him continued to defend stoically at the other end!

It was then,with the score at 2-2, that Burchett’s free kick nestled in the bottom corner but in playing out from the back,Mersham were punished late on by a well drilled Romney side!

A fantastic game ending 3-3,meaning that when Mersham meet South Ashford (the league leaders) in two weeks time,it really will be an important fixture in the context of this league season!

Man of the match was Josh Mowat,whose crossing,tackling and general hard work set the tone for a much improved display in the second half!

Mersham resume their league campaign this coming Saturday,with the visit of Marsh side Grasshoppers!